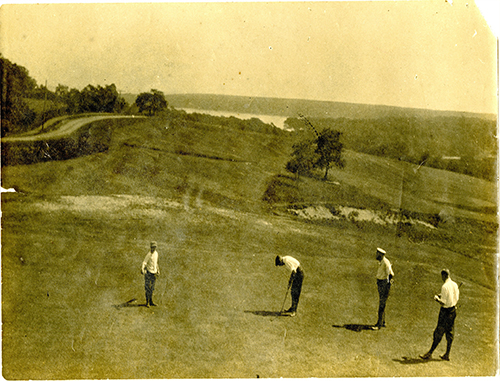 The sport of golf arrived in the United States in 1888 and the early courses were designed like those in Scotland. The Shelter Island Country Club was no exception. It’s still basically the same design as it was back in 1901. The course was developed by the Shelter Island Heights Association for the exclusive use of the Heights Association and its guests. Later, it opened to the public.

Wesley Smith, the first grounds superintendent, sculpted the links with pick and shovel, horses and donkey carts. The clubhouse was built by Charles Corwin with wood delivered in schooners from Connecticut  to Piccozzi’s dock and hauled by wagon to the hilltop. In 1942, the Heights Association decided to close the golf course. William Congdon, who had worked at the club since he was a teenager in 1920, proposed that he rent it and run it as a private business. The golf operation, which has been continuous since its founding, was run by Mr. Congdon and his wife, Olive, beginning in 1942.

For the next 34 years, the Congdons were successful, but in 1976 profits were low and the Heights wanted to raise the rent. The Congdons decided to retire, and the club was leased and operated by George Blados until 1978.

In the late 1970s the Town of Shelter Island bought the property from the Heights Association and appointed a board to oversee course operations. The board, in turn, found volunteers to run the club. The club has been operated ever since by a volunteer board of trustees elected by club members. The club was added to the National Register of Historic Places in 2009. The club became a not-for-profit organization in 2019.

In its almost 120-year history, the club has weathered hurricanes, nor’easters, wars, a pandemic and economic hard times. Golf has never stopped at Goat Hill. 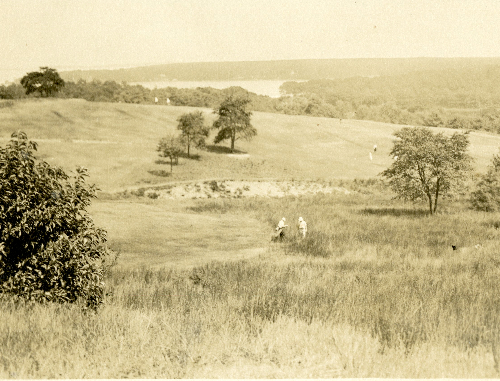 It is the mission of the Shelter Island Municipal Golf Course, Inc., to preserve, maintain and manage the historic nine-hole public golf course, known affectionately as “Goat Hill,” so it remains a vibrant centerpiece of Shelter Island living. It is our aim to continue Goat Hill’s reputation of “pasture golf”
at its finest and preserving the game of golf as it was meant to be played. To that end, the organization is committed to preserving the town-owned course as it was first designed in 1901 and to keeping it affordable for residents and visitors alike by returning all profits to club operations and course upkeep. In doing so, Goat Hill will remain a source of pride for the town and a symbol of the island’s rich history, and will continue to be a center for social, recreational and educational activities, now and into the future.